Once upon a time, a great man in Indianapolis was arrested for ALLEGEDLY swimming in the canal. Normally, this would be in the news for a day and quickly disappear. However, things tend to be a bit more newsworthy when you’re one of the best punters in the NFL. I’m of course talking about Colts punter and comedian Pat McAfee, who, five years ago, was just taking a quick dip in the Indianapolis canal, likely trying to cool off from a hot streak of winning with the Colts. I am here to tell you that there’s an easier to way to swim in the canal and NOT get arrested- Tri Indy!

END_OF_DOCUMENT_TOKEN_TO_BE_REPLACED

I know what you are thinking. We live in Indiana, amongst the corn fields and the steaming cow   pies, and the beach is far from reachable on a weekly basis. Fear not, your weekly dose of Sand Volleyball is actually within reach, even on a school night at Pinheads.

END_OF_DOCUMENT_TOKEN_TO_BE_REPLACED

Yesterday, June 21st, was the summer solstice, a.k.a. the longest day of the year. To celebrate the summer solstice and the beloved, ancient practice of Yoga, over 1,500 of Indianapolis’ yogis congregated on Monument Circle for the 3rd year of the city’s largest yoga event aptly named, Monumental Yoga.

END_OF_DOCUMENT_TOKEN_TO_BE_REPLACED

“I always knew hell would be hot, but I guess I didn’t expect I’d be holding down dog.” This was the thought running through my head in February of 2011. I was living in New York City, and rather than joining an expensive gym, I would buy Groupons for work out studios, attend one or two classes, and never return. One such Groupon was for a yoga class. One overcrowded room and several uppity and unapproachable yogis later, I walked home, shivering in the New York winter air, sweat frozen on my clothes, and fully convinced I would never again take a yoga class.

Fast forward to January 2015 in Indianapolis. I had been running, playing on a soccer league, and attending boxing classes, and thought I could benefit from a low-key once-a-week donation yoga class to stretch out my muscles. I started looking for a place to do drop-in yoga once a week; not have to belong- just be an anonymous face in a crowded class to stretch at the end of the week. I chose the wrong place, and I’m so happy I did.

END_OF_DOCUMENT_TOKEN_TO_BE_REPLACED 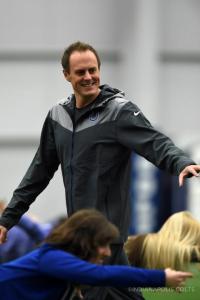 Trndy Indy took some time from consuming all of Indy’s most delicious eats to burn some of those “cals” off with Sean Bartram. Sean is the owner of Core Pilates and Fitness in Carmel, author of the newly released book High Intensity Interval Training for Women (found on Amazon), and official trainer to the Colts cheerleaders.