Just over a year ago, Nicole Conflenti set out to combine her passions of music and film. Inspired by the popular YouTube channel, the Mahogany Sessions, and Indy’s growing music community,  the Catalyst Sessions were born. The channel consists of acoustic single session performances of emerging musicians around the state of Indiana. The channel’s mission is simple:  “We believe music hits the hardest in its simplest form. That’s why we record artists live, raw, and unplugged. No microphones, no amps – just the music.” The concept is captivating and the talent is stunning. And it’s all conceptualized,  filmed and produced by Conflenti, a full-time college student.

“I love the local Indianapolis music scene. I think it’s growing into something awesome and I want to be apart of it.” 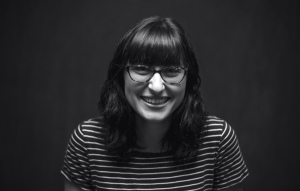 Conflenti grew up in Zionsville, IN before attending Ball State University, where she is currently a senior majoring in Telecommunications with a concentration in media video production. Conflenti has always been passionate about music and attended 42 concerts last year with her twin sister. During her sophomore year of college she decided filming music was her ultimate goal. She snagged an internship with Do317 and MOKB Presents, which quickly immersed her into Indy’s music scene. Through her internship, Conflenti was able to film various shows at the HiFi in Fountain Square.

“[The internship] gave me the confidence to pursue music. It was the first time I had ever been involved with music professionally.” She explained.

Conflenti found inspiration for the name of the channel in a verse of the NONONO’s hit song “Pumpin Blood.” The line goes, “you’re a catalyst to your own happiness you know.” And that was the exact emotion Conflenti planned to evoke with the channel. She wanted fulfill her own happiness by combining film and music while also helping musicians express their own art.

“I truly really liked that line and the idea of kick starting something. That’s what I felt like I was doing,” she said.

Conflenti enlisted the help from her friends and researched local Hoosier musicians to find artists for the channel. And soon after she launched the channel, she began to receive inquiries from local musicians who had seen her work and wanted to be apart of it. The channel includes an impressive list of artists so far, including Lily & Madeleine, Ivory West, Jeff Kelly and Brothers Grimm to name a few. Check out Conflenti’s most recent session with local Indianapolis singer-songwriter Emily Myren below!

“They are my little catalyst family. I’ve made connections with everyone I’ve filmed, but also become great friends.”

This project seems like a lot to take on for a full time college student with an on-campus job, but it actually comes easy to Conflenti because it’s something she loves doing. Each video consists of pre-production, which includes the musician selecting the song and based on the song then Conflenti selects a location. It has allowed Conflenti to travel all over the state of Indiana and explore some unique places. The actual filming can take anywhere from two to three hours depending. And then Conflenti spends about 15 hours during the post-production phase, which includes editing the video and photos. The channel currently has over 100 subscribers with almost 20,000 views.

Conflenti hopes that eventually after graduation she will be able to invest even more time into the channel. But before graduation, Conflenti is taking the Catalyst Sessions across the pond when she studies aboard in Scotland. She plans to film various artists across the U.K. It’s an exciting adventure and a dream come true. Conflenti has created a GoFundMe page to help raise funds to purchase top-notch equipment for her journey, find the link below to learn more and donate!